The Shield & Diamond is available in both print and online editions.  The following is from the Shield and Diamond Winter 2018 edition: 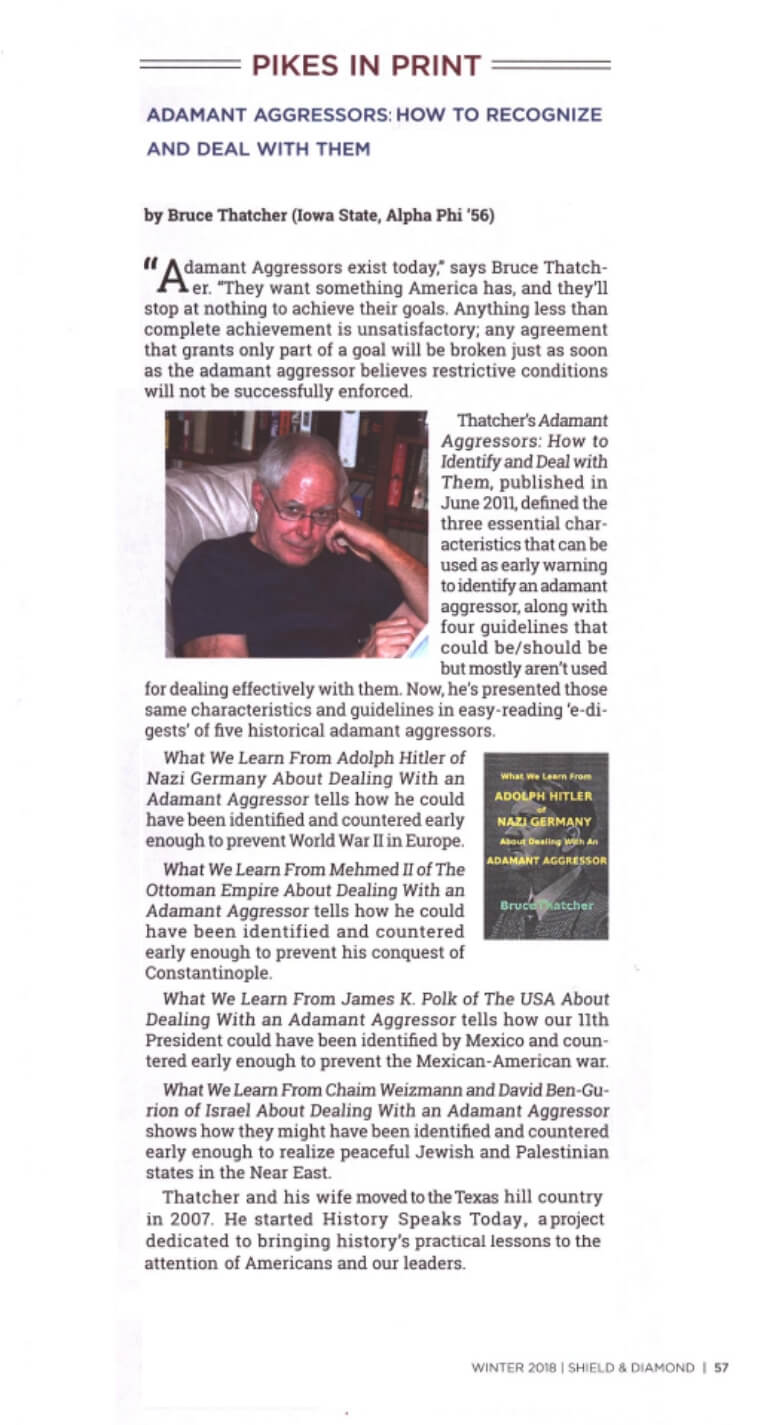 Text of the article:

Adamant Aggressors: How To Recognize And Deal With Them

"Adamant Aggressors exist today," says Bruce Thatcher.  They want something America has, and they'll stop at nothing to achieve their goals.  Anything less than complete achievement is unsatisfactory; any agreement that grants only part of a goal will be broken just as soon as the adamant aggressor believes restrictive conditions will not be successfully enforced.

Thatcher's Adamant Aggressors: How to Identify and Deal with Them, published in June 2011, defined the three essential characteristics that can be used as early warning to identify an adamant aggressor, along with four guidelines that could be/should be but mostly aren't used for dealing effectively with them.  Now, he's presented those same characteristics and guidelines in easy-reading 'e-digests' of five historical adamant aggressors.

What We Learn From Adolph Hitler of Nazi Germany About Dealing With an Adamant Aggressor tells how he could have been identified and countered early enough to prevent World War II in Europe.

What We Learn From Mehmed II of The Ottoman Empire About Dealing With an Adamant Aggressor tells how he could have been identified and countered early enough to prevent his conquest of Constantinople.

What We Learn From James K. Polk of The USA About Dealing With an Adamant Aggressor tells how our 11th President could have been identified by Mexico and countered early enough to prevent the Mexican-American war.

What We Learn From Chaim Weizmann and David Ben-Gurion of Israel About Dealing With an Adamant Aggressor shows how they might have been identified and countered early enough to realize peaceful Jewish and Palestinian states in the Near East.

Thatcher and his wife, Carol, retired from their successful consulting firm and moved to Texas hill country in 2007.  He started History Speaks Today - www.historyspeakstoday.com, a project dedicated to bringing history's practical lessons to the attention of Americans and our leaders.