Bio - Bruce Thatcher - In His Own Words 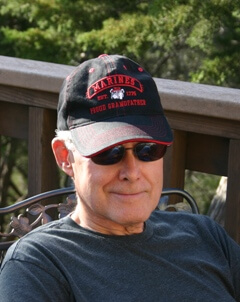 I don’t remember the beginning of my life.  But I’m told it began on April 4th, 1937, in Huron, South Dakota, which a birth certificate confirms (at 8:20 a.m., it says).  That same document records that my father, Claude Howard Thatcher, Jr., was 26 years old at the time, and that he worked as a “R.R. Surveyor for the C&NW” for the prior six years.  My mother, Mildred Helen Lyman, it said, was 23 years old and had been occupied as a housewife for the prior 2½ years.  That’s good enough for me.

I don’t remember much about the first five years, either.  (They must have gone by quickly!)  But I recall running away on a tricycle with my older brother Alan at the wheel.  We got as far as the railroad tracks in downtown Huron, where some railroad snitch spotted us and turned us in.  And I remember singing, with Alan, “La Cucaracha” at a B.A.R.E. party.  (Railroad people never used the full “Benevolent Association of Railroad Employees” when referring to that organization; it was “the B.A.R.E.” to them.)  We were dressed in Mexican attire, with big sombreros.  I don’t know if we also danced.  But I think people applauded.  Maybe because we were cute.  Or because Dad was a member of the B.A.R.E.

We lived in what I remember as a big house at 1108 Idaho Street.  (It was really quite tiny.)  Mom had a vegetable garden in the back yard, and across the street was a big vacant lot that became a skating rink every winter.  Two blocks north (up the alley) was Jefferson school, where I attended kindergarten through 4th grade (fall of ’42 - spring of ’47).  World War II was a constant reality, so we played a lot of soldier/sailor games in town.  Dad was an air raid warden.  And we went to the movies most every Saturday matinee, where newsreels of the war played each week.

I had my first job during that period.  I’d walk downtown to the Nehi/Royal Crown bottling plant each Saturday and help load empty bottles on a conveyor that took them to be washed.  Some of the workers gave me a quarter or two for helping.  I also delivered the Weekly Reminder, a sort of advertising newspaper, on a regular route.  And I set pins in the bowling alleys.

We kids spent a lot of time on Grandma Lyman’s farm outside of town, often walking the three miles or so after school.  There we did chores, rode horses, and hunted rabbits and prairie dogs.  I ran a trap line one or two winters and caught some furry critters.  (I don’t recall ever actually selling any pelts, but I do recall being sprayed by a skunk that wasn’t quite ready to give his up!)  In the summers we went swimming a lot, both at Ravine Lake, which serves as Huron’s municipal pool, and in the James River that runs past the farm and town.

In the summer of ’47 we moved to Sioux City, Iowa.  I walked the four blocks to Hunt School for the 5th and 6th grades, and to North Junior High for grades 7-9.  It was at North Junior that I got involved in the radio club, which led to my first amateur radio license, WNØGXH.  I managed to get through Sioux City Central High School early, graduating mid-term in January 1955.

I worked most of those years at various jobs, including newspaper delivery, setting pins, shoveling snow and engineering and studio work at local radio stations (KSCJ-FM, KCOM/KMNS) and KTIV, the new television station.  Because of my amateur and commercial radio licenses, I was able to join the Navy Reserve when I was 17 with advanced standing as an electronics technician, petty officer 3/c (the youngest petty officer in the Navy, they told me).

The Navy gave me a full NROTC scholarship to Iowa State College.  I moved to Ames in the spring of 1955 to take a job with WOI-TV and earn some money before starting school.  In the fall I pledged Pi Kappa Alpha fraternity.

In our sophomore year, I met, but paid little attention to, a red-head who seemed very intent on studying.  Carol Ann Handorf (Handy, to her friends) was on a scholarship that required her maintaining a very high grade average, which she consistently did, and she had to work for spending money.  Nevertheless, she became involved in Kappa Kappa Gamma and in campus activities.  A year later, we found ourselves working together on a student activity . . . and some months later, near the end of our junior year, we married.  I was separated from the Navy at that time and immediately enlisted in the Marine Corps reserve.  I worked that year for radio station KASI as chief (only) engineer and Sunday announcer, and I graduated from Iowa State with a Bachelor of Science degree in February of 1959.

I joined General Electric’s Advertising and Public Relations training program and reported to the Hotpoint Commercial Equipment Department in Berwyn, Illinois.  Handy and I loaded daughter Shon and our entire earthly possessions into and onto a ’47 Pontiac and moved east to an attic apartment beside the Rock Island Railroad main line in Tinley Park, Illinois.  For the next year I rode the train (and el/subway) to and from work each weekday.

In June 1960, I transferred to the G-E Advertising & Sales Promotion Department as a copywriter.  We again packed everything we owned into a small U-Haul, pulled behind that same ’47 Pontiac, as the four of us – Handy, Thatch (as I was known to some), Shon and Bruce Jr. trekked to our new home near Schenectady, New York.

The year we spent in Schenectady was packed with activities related to G.E. and G-E acquaintances, and the struggles of getting a grip on the realities of family life.  Handy and I got involved in local theater with the Schenectady Light Opera Company (insiders called it “SLOC”).  I was in “Oklahoma” in the fall of 1960, and both of us were in “The Mikado” the following spring; I directed, Handy performed.  It was during that spring production that my brother Alan was in an auto accident in Chicago.  I flew almost directly from the theater and spent a week in the hospital with Mom and Dad and Alan . . . who never regained consciousness.

A few months later, in June of 1961, I transferred to G.E.’s Commercial Equipment Department in Chicago Heights, Illinois.  We moved into a stifling-hot, upstairs apartment while waiting for our first house to be built.  In October, we moved into our new home on Grandview Drive in Hazel Crest, Illinois.

The next five-and-a-half years seemed to go slowly, but maybe that’s because we were running so fast.  Handy taught for a few days as a substitute teacher at Bloom Township High School (on her first day they thought she was a student and tried to enroll her!), then shifted to a musical vocation that has involved her, off and on, ever since.  She became the pianist for a mission church in Hazel Crest, and later became organist and music coordinator for Faith Lutheran Church in Prairie Village, Kansas.  And she managed a household, absorbing the greater share of energy emitted by two very . . . innovative kids.

We both became embroiled in politics at the precinct, local and state level, and I was elected to the Bremen Township High School Board of Education in 1963, becoming its President in 1965.  At the time, I was a Product Planner for General Electric commercial kitchen products, and Product Manager for Commercial Dishwashers.  In June of 1964 I entered the University of Chicago’s 190 MBA program, from which I graduated in December of 1966. And in January of 1967 we moved to Overland Park, Kansas, a suburb of Kansas City.

I had accepted a position of Manager of Market Development for the Vendo Company, at the time the world’s largest manufacturer of vending machines.  And I continued with Vendo for almost eight years in various roles — product manager of dispensers, distribution manager, director of pricing administration, assistant to the President.  I also taught marketing classes at William Jewell College and the University of Missouri at Kansas City.  We moved into a new house on Roe Avenue in the spring of 1968, where we lived for the next 39 years!

In 1972 we became involved in a consulting venture on a moonlighting basis and, in January of 1973, we incorporated TelCon Associates, Inc.  Handy ran the first office from our home, and I left Vendo in mid-1974 to devote full time to TelCon.  During the next ten years TelCon grew and Handy earned an MBA in Finance from the University of Kansas.  Shon moved to Minneapolis and then to Austin, Texas, making Handy a graduating grandmother (of Bri and Travis) at KU, spring of ‘85.  Bruce, Jr. graduated from auto mechanics school in Wichita, went on to computer sciences at KU, and married his high school sweetheart in between.  (Karen graduated from KU with Handy that ’85 spring; she and Bruce Jr. lived in the country between Eudora and Linwood KS for the first several years of their life together where Laura, Thomas and Kyle were born.)

Even as I squeezed in community service as a member of Kansas City Rotary and national service on the Board of Literacy Volunteers of America, TelCon Associates survived 30 years with us at the helm.  It supported several families comfortably, and will likely do that into the indefinite future since Handy and I passed the reins to Karen at our retirement in 2003.

Vacations weren’t much a part of our early married lives.  We traveled to Spain on assignment for G.E., but the first real vacation was in the early '70's to Colorado.  A couple more of those were managed, but we began traveling with regularity in the mid-'80's.  We’ve enjoyed trips to mountains and cities, but the ocean and its beaches have the most allure for us.  So we’ve checked out the sands from Kauai to Cancun to Cayman and more.  Handy’s addicted to snorkeling and, until recently, I was an active scuba diver.

By 2004 Grandson Travis had made us great grandparents twice.  I became active in the Executive Service Corps, providing pro-bono consulting to non-profits in the Kansas City area.  And, in 2005, we began attending Holy Cross Lutheran Church, where I became a Stephen Minister. (Stephen Ministry is an international organization of trained lay caregivers.) I also taught for a year as adjunct professor in Avila University’s MBA program.

In 2007 we moved to a new house in the Texas hill country north of New Braunfels.  We joined Peace Lutheran Church, where Handy is active sewing quilts and subbing at the organ, I’m active in Stephen Ministry, and singing in the choir.

In 2008, I got serious about lessons of history, which was becoming a passion.  I despair that many, especially in our government, don’t seem to understand history’s lessons; we keep making the same mistakes.  So I resolved to do what I can to change that.  The project became History Speaks Today, and I began writing the first book as a collection of cases that demonstrate unassailable lessons for application in the here and now.  Adamant Aggressors was published in 2011, followed by Immigration in late 2012.  Rise and Decline came out early 2017, and Gun Mania:  A New Perspective – What We Must Do to Reduce Shootings, Homicides and Suicides in America debuted in late 2019.

Back to Top of Page

Let Me Hear From You

I welcome your participation in the HST Project.  Send your ideas, suggestions, and feedback to me through the contact page.