If you care about gun violence and suicides...


This Book Changes Everything. 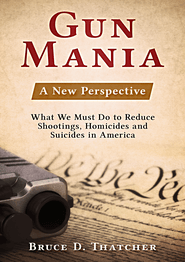 HST Presents Political Science Cases From History, Learning And Applying Their Insights To Develop More Effective Public Policies For The World We Live In

History Speaks Today seeks to identify critical conditions in today’s world - international, national, local, personal – find and examine historical parallels and clearly articulate what history shows to be courses of actions for us to pursue (or, at least, to absolutely avoid).

The founders knew their history.  It spoke to them.  They carefully applied its lessons as they wrote the Declaration of Independence, crafted the Constitution of the United States of America, and insisted on a Bill of Rights as its first ten Amendments.

Far too many of our citizens do not know their own or others' history and its lessons for public policy.  To their detriment, they blindly allow others, often similarly ignorant, to shape their destinies.  They repeatedly drift into and through scenarios in ways that history warns against.

HST turns history into political science to derive practical guidelines for dealing with today’s complex problems.  Its unique approach examines relevant historical cases from which explicit lessons can be drawn.  Lessons are summarized in the form of clearly articulated and concise principles to guide today’s leaders, policy makers, pundits and general citizenry.  Each HST book is a reliable resource for a single area of public policy concern.

History’s lessons on adamant aggressors, immigration, nations’ life cycles and guns in America become crystal clear through the cases in these books.

History Speaks Today debued in 2011 with Adamant Aggressors, the first book in the HST Series   It explains how to identify what Thatcher calls ‘adamant aggressors’.  From five historical cases, it derives and specifies the four essential guidelines for dealing with them.  Thatcher makes clear that when we ignore even one of these guidelines we do so at our peril.  In Adamant Aggressors, he identifies current aggressors who threaten the United States.

The five cases in Adamant Aggressors are also distilled in five separate e-book digests for busy readers.  Each articulates the guidelines for identifying and dealing with adamant aggressors, and shows how they played out for one historical figure and those he set out to conquer.

The second book in the HST Series, Immigration, came out in 2012.  It examines past and present immigration policies of seven nations – some were successful, others not so much, still others were disastrous.  From these cases Thatcher derives three essential guidelines that must be followed for every successful immigration policy, including the long-overdue reform of America’s flawed current immigration policy.

The third book in the HST Series, Rise and Decline, was completed in early 2017.  It examines the completed life cycles of four nations, and it shows where the United Kingdom and the United States are in their cycles.  From these historical cases Thatcher identifies the consistent condition that accompanies the rise and decline of each nation, and he shows what Americans must do to revitalize our country and hold back its decline.

The fourth book in the HST Series, was completed late in 2019.  Gun Mania shows that guns are present to varying degrees in five Anglo nations, but they are a core cultural element in just one – the United States.  This reality has powerful implications for how we deal with shootings, homicides and suicides in America.  We must resist the mirage of eliminating guns, and seriously address the much tougher factors behind all suicides and homicides, not just those that involve guns.

Bruce Thatcher is available for interviews about the HST Books and their subjects, about Americans’ understanding of history, and about the teaching of history in our schools.

Media members and journalists may contact Bruce Thatcher directly for interview requests.  History Speaks Today values your comments and suggestions.  Your input about the HST Project and HST Books is appreciated.